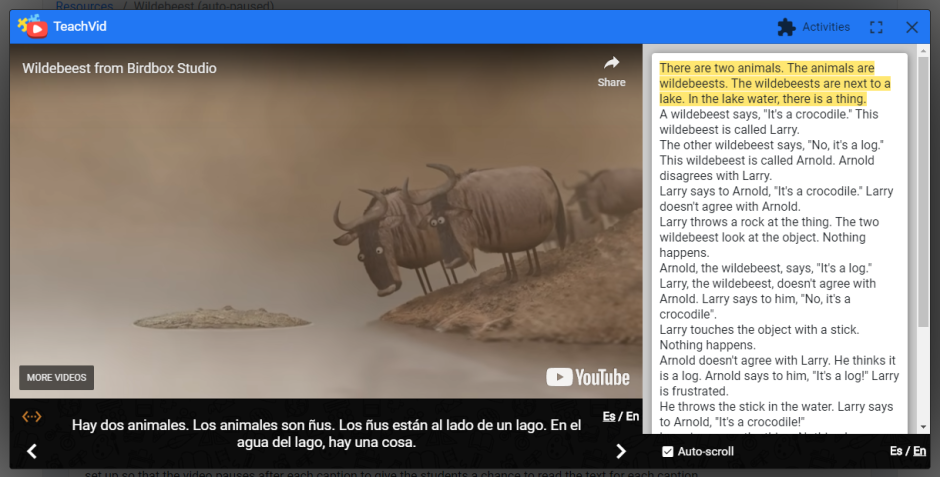 Clipchat, or Movietalk (as it is often called, apparently incorrectly), is a technique used by teachers who embrace a comprehensible input approach to language acquisition, whereby they provide students with tons of comprehensible input by asking questions and talking about stills or short sections from a short video.

Good sources of Clipchat videos include Birdbox Studio, and the wonderful Simon’s Cat.

A Clipchat summary is essentially a narration of the events of a short video, written in language which is repetitive and pitched at the level of your students.

With a video that doesn’t have any of its own language content, matching a narration to video sections is a bit more problematic, in that you may need to have a sentence or two of descriptive content that describes what can be seen in only a second or two of the video. Unless the video pauses automatically, there isn’t enough time for students to read the descriptive “caption” before the video moves on to the next one.

By clicking on the new checkbox at the end of the resource creation process (see above), you can now set up resources so that they always automatically pause after each caption in Learn Mode (just as they always did in Activity Mode). The video pauses to give the student time to read the caption for each section, and the student clicks the video when they are ready to move to the next section.

As I said, this means that you can have descriptive “captions” that fit with video sections that last only a second or two.

Note that, unlike typical transcript-based resources on TeachVid, this sort of activity no longer works on improving students’ listening skills (except perhaps via the text-to-speech in Learn Mode). As such, they are marked as “Reading” resources rather than “Transcript” resources (see image above). But what you end up with is textivate-style parallel text activities broken down into sections directly linked to video playback.

Have a play with the example resources below:

Let us know what you think in the comments 🙂